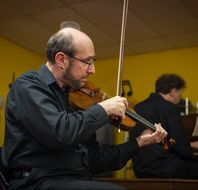 Leonid Yanovskiy, Violinist
Russian born violinist, violist and conductor, Leonid Yanovskiy is the Professor and Director of Strings and Orchestra at the University of West Florida, Pensacola.
He is the concertmaster of the Pensacola and Northwest Florida Symphony Orchestras, Principal Violinist with the Washington Square Festival, NYC, and Co-Director of the Gulf Coast Virtuosi Chamber Music Ensemble.  Dr. Yanovskiy graduated from the Moscow Gnessin Academy of Music, Russia; the Rutgers University, NJ; and the Fontenbleau Conservatoire Americaine, France. ​ Among his teachers were Arnold Steinhardt and Michael Tree of the Guarneri Quartet, Olivier Charlier of the Paris Conservatory, and Valentin Berlinsky of the Borodin Quartet.

Yanovskiy taught violin and chamber music at the Moscow Gnessin College and Academy of Music and was a Teaching Assistant at Rutgers.  At the University of West Florida, students of Dr. Yanovskiy are winners of national orchestra auditions, as well as national, regional, and state solo and chamber music competitions.  His students have successfully entered the Encore and Meadowmount Schools of Music, as well as graduate programs at the Juilliard School, Cleveland Institute of Music, Florida State University, University of North Texas, University of Maryland, and others.
​
Yanovskiy was Principal Violinist with the Moscow Chamber Orchestra Northern Crown, Goliard Chamber Ensemble, NYC, and Chamber Orchestra Philadelphia Virtuosi.  He was a violinist with the Orchestra of St. Luke’s and the American Symphony.  Under the baton of Abbado, Botstein, Mackerras, Menuhin, Norrington, Previn, Shaw, Zinman, and others, Yanovskiy appeared on the stages of the Carnegie, Avery Fisher, Alice Tully, Chicago Orchestra, and Boston Symphony Halls, the Kennedy Center and Metropolitan Opera.  Yanovskiy has performed recitals throughout the United States and in Brazil, Denmark, France, Germany, Israel, Korea, and Russia.  In 2012, The New York Times described his playing as “…a luminous performance; a sumptuous, vibrato-rich tone and a kind of energy that made the fast movements dance.” In 2015 – 2016, Yanovskiy is scheduled to perform solo recitals in Tallahassee, Chicago, and at the Weill Recital Hall at Carnegie Hall, New York. 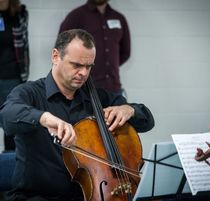 Boyan Bonev, Cellist
Award winning cellist Dr. Boyan Bonev, a native of Bulgaria and music professor at the University of West Florida, is the featured soloist for the NFSO’s September 19, 2015 Season Opening concert. 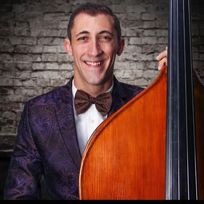 Rodik Newsome, Double Bass
Rodik Newsome is a double bassist, educator, and student in the Gulf Coast Region. Currently based out of Mobile, he is a member of the Mobile Symphony Orchestra and occasionally plays with the Gulf Coast Symphony Orchestra and Pensacola Symphony Orchestra. As an educator, he teaches privately and helps with musical ensembles affiliated with the schools in the area.
Rodik is currently in his fourth year of being a full-time student at the University of South Alabama. He is pursuing a bachelor degree in Double Bass Performance, studying with Taylor Hollyer. 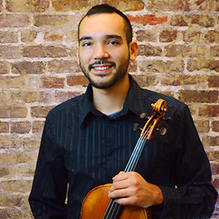 Josiah Coe, Viola
​Josiah Coe, violist, is committed to connecting with diverse audiences through chamber, solo, and orchestral performances. In 2017 he won a section position with Atlanta Ballet, and was appointed Assistant Principal/Acting Principal of Columbus Symphony Orchestra. He is also Principal Violist of
the Northwest Florida Symphony Orchestra; has been engaged as Guest Principal with Symphony Orchestra Augusta and Pensacola Symphony Orchestra; and has acted as Assistant Principal with Mobile Symphony Orchestra. In the Atlanta area, Josiah performs with Atlanta Opera and Atlanta Symphony Orchestra. As a chamber musician he has performed throughout the United States and Europe. He was a featured artist at the International Double Reed Society 2016, and gave recitals and concerts at MusicX in Blonay, Switzerland; Le Feste di Musica in Fiesole, Italy; Amelia Island Chamber Music Festival; Aspen Music Festival; and the American Institute of Music in Graz, Austria, where he also served as Assistant Principal Violist. Josiah received his Bachelor of Music from Indiana University Jacobs School of Music under Alan de Veritch and his Master of Music under the tutelage of Ralph Fielding at Lynn Conservatory of Music. He has coached with many influential artists, including Alexander Kerr, Stephen Wyrczynski, David Cole, Joseph Robinson, and Jeffery Irvine. A proponent of the transformative power of music in education, Josiah is an Artist in Residence at Porterville Summer Strings, in Porterville CA, where he works with underserved students. He is an award recipient from Lynn University, University of Indiana and The Colburn School.